Americans have a peculiar way of incorporating other cultures and subcultures into their own. Largely by using objects, fashion, language sometimes religion, and sometimes media American culture forge and/or reinforce certain social stereotypes when it swallows “the other” whole. Often times the marriages are forced, or loud, or messy.

Take for example the boom box, a heavy, anti-aesthetic, kitsch object with a blatantly non-positive meaning. Not something typical of the museum, but a cultural object that caught the imagination of New York-based sculptor, Tom Sachs. His Boombox Retrospective, 1999-2016 at the Brooklyn Museum (April 21–August 14) is designed to provoke and intrigue, offer a short history of the boom box and an essay on its cultural impact musically and socially.

Boom boxes were originally conceived to play AM/FM radio frequencies as well as audio cassettes. But these large objects are essentially the elephant ancestor of our pocket-sized iPhones; fabricated from several pounds of plastic, a mass of electronics and perhaps a half dozen pairs of speakers, they function like sledgehammers in the world of sound, allowing their owner to overwhelm all other voices.

But their day came and went. When first launched they were smaller versions of what they morphed into giants in the 1980s. And these music boxes ended up as symbols of hip pop culture; they were the mobile entertainment systems of less monied people. Boom boxes were carried around on their owners’ shoulders like sex dolls, and of course only spoke (or sang) when turned on. The metaphors were pregnant: here was an electronic machine gun that blasted music and all that content represented. Clearly, our desire to ascend to a more powerful version of ourselves with an ongoing roar of sound was packaged in the boom box. And those who brandished boom boxes were largely poorer minorities – urban blacks and Latinos – who used the boom box to draw boundaries within city spaces.

So how, exactly, does Tom Sachs’ do-it-yourself aesthetic fit in this scenario? What is he actually (re)building with the 18 works on view? How is street culture our culture? And how does the Brooklyn Museum take street culture off the sidewalk and into the temperature controlled gallery?

Sachs’ boom boxes attempt to reinterpret their original social-cultural purposes and essentially re-write history. It might be fair to say that the artist’s implicit anarchy manifests itself mainly through innovative juxtapositions of materials and concepts which – almost traveling in a wormhole through space-time – “comes from and goes back to” History. This is achieved with a range of found and common materials to make the boom boxes on view appear more than what they are – a dash of anthropomorphism and garage aesthetic gets them there.

Sachs’ works appear to travel on their own timelines but, most importantly, they challenge conventions – if by “conventions” we mean our own “visual habits” – what we’re used to/expect to see in a work of art.

Perhaps calling Sachs’ works “assemblages” or “bricolages” does not do them much justice, because he’s trying to erase the past by dressing these objects up into a better, more fanciful version of their former selves. 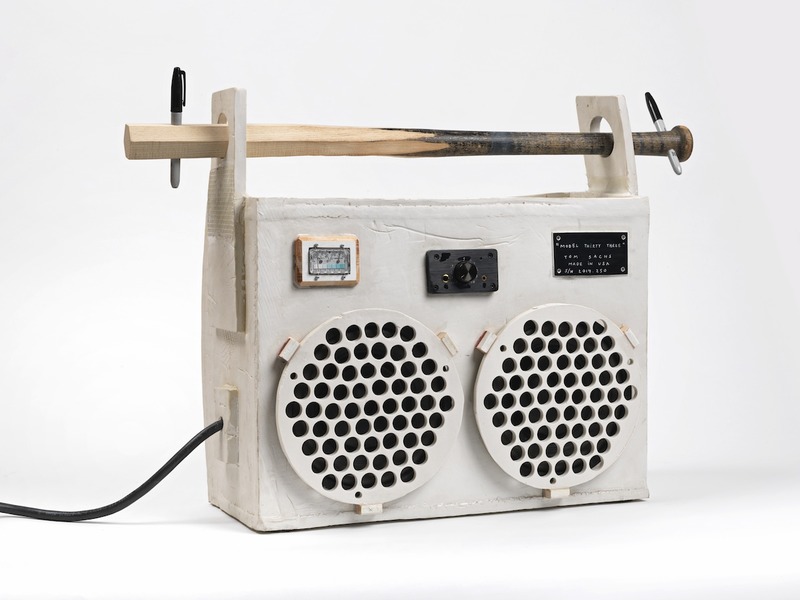 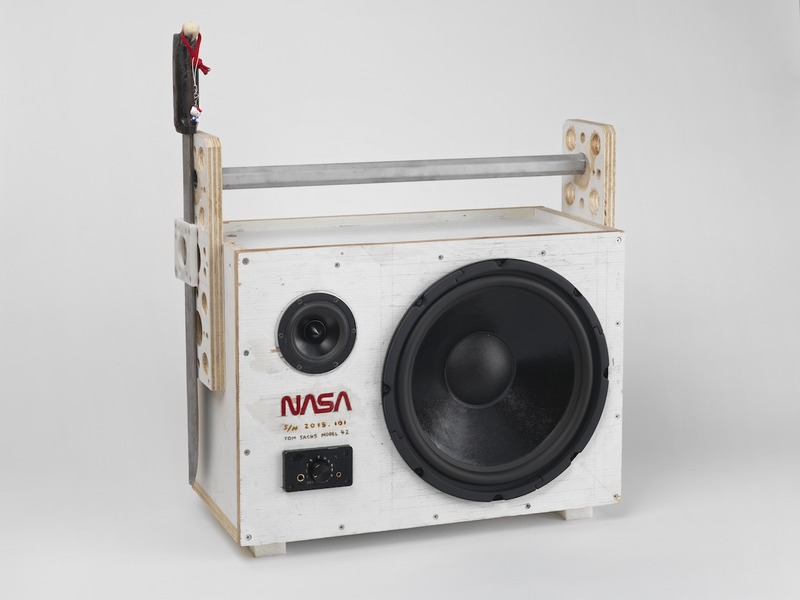 The 18 boom boxes built, designed – and “culturally (re)designed” – by Sachs are each characterized by an intellectually challenging unique “personality.”

In “Clusterfuck” (2014), for instance, a white boom box made of porcelain and other materials – including bull’s horns – are cobbled together in a taxidermy style composition. There is implied in this piece a sense of the Old West, and the work riffs off the American Native Indian – the horns as a headdress. In some ways, this boom box wears a kind of “cultural mask,” a rewritten version of the former cultural context of boom boxes. It is a stylized modern warrior, a shaman, a spiritual entity and fills the gallery with unintelligible natural landscapes – the same paths we walk in our dreams when our spirits awaken.

As Tom Sachs explains in his interview with Time Out Magazine, the work “Guru’s Yardstyle” (1999) refers to a snowball stand on Lafayette Street where he used to have yard parties with DJ Nova. This work, however, in its guise of a transfiguration of an old recollection of the artist, turns out to be emotionally colder and less engaging than the humanoid boomboxes such as “Sarah” (2014) – which carries a sword embedded in “her” head almost like a metaphorical weight she’s been forced to bear in the name of contemporary art – or “Phonkey” (2011), which at first glance looks like a droll robot that just landed on planet Mars.

“Defender” (2000) is another emblem of America’s lost youth, a video game for obsessed teenage boys who skipping school would toss quarters into its maw as they manned pixel battleships and saved the universe. Perhaps young Tom Sachs also used those massive boxes layered in motorcycle tattoo drawings, to defend himself from a difficult reality while playing in a virtual reality. This image reminds me of Rosso Malpelo, a character of one of the most iconic Italian verist writers, Giovanni Verga. Malpelo is a poor boy left orphaned by a mine explosion where his father was working. To overcome the pain – and since all he knows are those mines – he spends hours working in the same mines where his father died. The result: total immersion in a lost world, and a detachment from the present.

Altogether these works point to the fundamental relationship between men, order, and symmetry. There are, indeed, countless references to painstakingly re-arranged futuristic architectures and designs that might deceive us into believing that Sachs’ work would be purely aesthetic, yet whenever he shares his vision and artistic process with us – take a look at his Vimeo channel, for instance – he’s never disappointing. Sachs is a master in creating interdisciplinary connections between the original objects and memories from which he takes inspiration. (I still remember viewing his work in person for the first time in Bologna, at the Maramotti Collection, next to works by Alberto Burri and Enrico Castellani, and thinking how his altered objects were simultaneously from the present, the future, and the past. 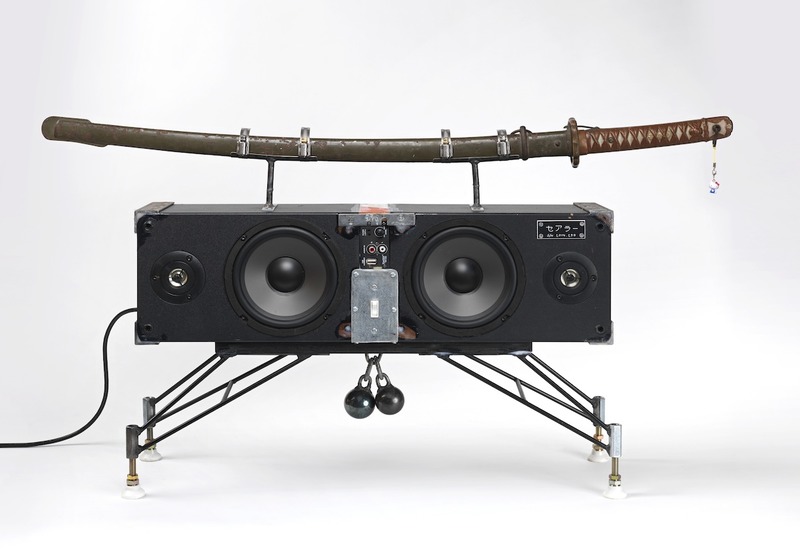 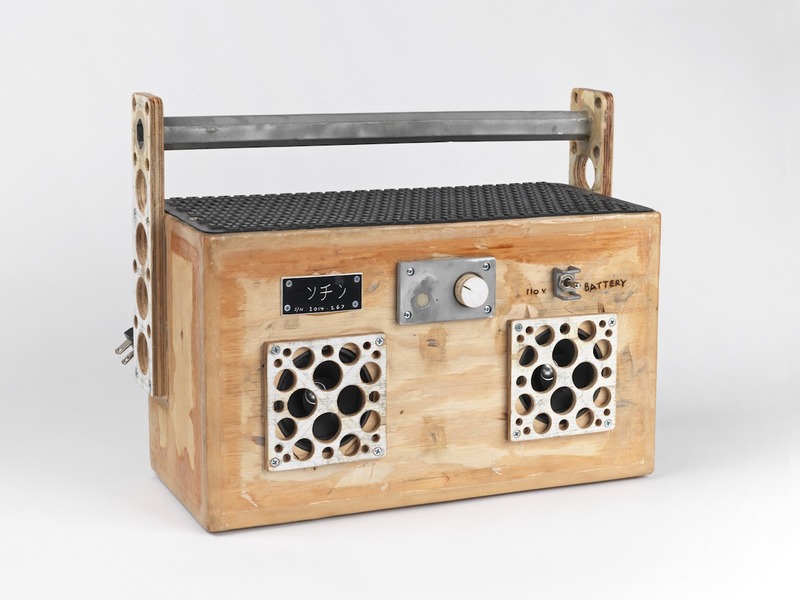 I’m left with a pair of questions after viewing this exhibition: are these boom boxes meant to resuscitate the voices and sounds of American minority cultures, or are they rather meant to trigger a discussion about the objects that made our history regardless of our social-cultural roots? Or better, how is it that Sachs’ works, based on historically relevant objects such as boom boxes, will one day turn into a poignant expression of today’s present history?

Tom Sachs’ Boombox Retrospective can be considered interesting and even educationally useful in virtue of the secrets it hides and reveals, and the invisible concepts and references it points out. A success for the Brooklyn Museum curators, too in both mixing up old and new with creativity, boldness, and the more than the latest trends in popular culture – indeed some of the defining notions of what a trend really is, or was.