The Presidential Election season in the United States never fails to provide an abundance of rich material for artists, journalists, and anyone participating in the cultural conversation to engage with. Yet, to say “this election is no different” would be a gross understatement. With a bigoted former reality TV star leading the imploding Republican Part, and the instant fame of average red sweater-wearing citizen Kenneth Bone, it is safe to say the 2016 Presidential Election is quite unlike any other in history. Gallery Bergen in New Jersey has responded to the current political climate with their group show “Art VOTES: Visualizing the Democratic Process,” on view until Friday, November 11th, 2016. The exhibition features works by twenty-three artists from across the country, all of which relate to government, the electoral process, or specific themes and issues surrounding the current Presidential Election.

Among the multi-media works in the exhibition is Arlene Rush’s “Rush for President,” a satirical interactive installation for which Ms. Rush envisions what her own Presidential campaign might have looked like had she decided to run in the 2008 election. “Rush for President” features a large campaign poster with Ms. Rush in a fine suit and pearl necklace standing beside a man she identifies as Derek Adams, the gallery director who has endorsed the artist’s bid for the Presidency. Mr. Adams wears a clean white button-down shirt with a “Rush for President ‘08” t-shirt pulled on over it.

Below the poster is a table draped with the early version of the American Flag attributed to Betsy Ross, brandishing a circle of thirteen stars representing the thirteen original colonies. Atop the table sits a bowl of “Rush for President” buttons for gallery visitors to take with them and a donation box, imploring viewers to contribute to Rush’s campaign and “world peace.”

The poster image of the mature white woman next to the young black man immediately recalls the disquiet of the 2008 Democratic Primaries, in which Hillary Clinton and Barack Obama faced off for the official Presidential Nomination from the Democratic Party. Although the DNC patted itself on the back for hosting such a historic primary between two ‘minority’ candidates, the racial and gendered tensions underlying that election were palpable. This only further illustrated to voters how far we still have to go in accepting and accommodating marginalized groups in our country.

Racial tension was not the only thing that gave voters pause during the 2008 Democratic Primary. After spending weeks poking holes in each other’s political careers in attempts to secure the nomination, Obama and Clinton quickly shifted gears once Barack had won out. As any candidate loyal to their party must do, Clinton went from questioning Obama’s level of experience to campaigning along with him, insisting he was more suited to the Presidency than his Republican opponent, longtime Senator John McCain. In return, Barack offered Clinton the Secretary of State position in his cabinet; despite the flaws of hers that he chose to highlight for his own political gain a few weeks earlier. Seeing Rush and Adams side by side below the red and blue “ ‘08” logo recalls the events of that year’s election and serves to remind us of the fickle nature of political relations, and the implications of that in the public’s ability to trust their candidates. 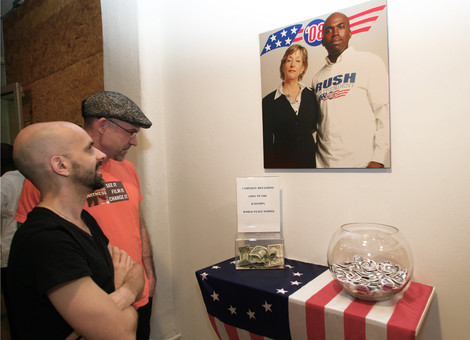 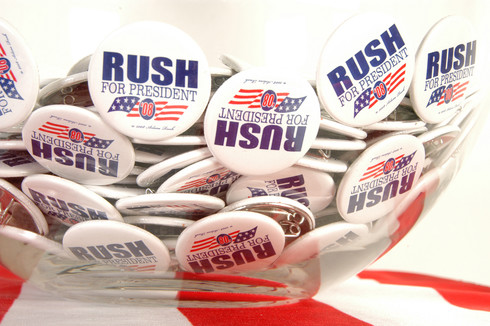 The ‘Betsy Ross’ flag ties into the dated theme of “Rush for President.” As a campaign for a 2008 Presidency taking place in 2016, the elements of Rush’s display that are seemingly stuck in the past serve to remind the viewer of the highly flawed and outdated electoral process we still rely on in 2016 to designate our leaders. However, the 18th-century flag creates an even more disjointed timeline, lending the piece an increasingly complex historical narrative. One can’t help but be reminded of Donald Trump’s hollow “Make America Great Again” slogan. The phrase refers to no particular period of time, nor any specific qualities that must be restored in order to ensure ‘greatness.’ The brilliance of “Make America Great Again” is that it doesn’t mean anything at all. The individual Trump supporter can project their own definition of ‘greatness’ onto the slogan, whichever time period in American history they’ve glorified, and convince themselves that Trump shares those same values. For some, that period of ‘greatness’ may have been as recent as 2008. Others pine for the days when thirteen stars on the flag were enough to account for every colony in America. “Make America Great Again,” means something completely different to each individual, rendering the phrase ultimately meaningless.

Rush drives home her point about the vague and often empty promises candidates make on the campaign trail with her donation box asking viewers to empty their pockets for ‘world peace.’ The ambiguous motive behind the donation box echoes the roundabout way politicians answer debate questions when competing for votes; talking constantly yet rarely mentioning anything of tangible substance. Viewers and voters are left to wonder what their candidate truly believes in, and what they will actually do with the money and power they acquire.

“Rush for President” does an impeccable job of underscoring some of the problematic aspects of the electoral process and how these pitfalls affect voters’ perspectives and faith in that system. In campaigning for a 2008 Presidency in 2016, Arlene Rush highlights how deeply out of touch many politicians are with the real issues affecting the public today. Yet there is an even more pointed observation to take away from “Rush for President” in the wake of Trump’s Presidential candidacy. The installation is meant as a satirical interactive art piece, but Rush actually is handing out buttons and collecting campaign donations like a real candidate would on the campaign trail. “Rush For President” begs the question, what is the difference between this work of art and an actual Presidential campaign? If the political climate of 2016 is such that a reality television host like Donald Trump can run on a campaign of outrageous bigotry and get as far as he has in this election, who knows? If Arlene Rush’s satirical campaign were to pick up enough momentum, anything could happen.