Signal‘s Without a Body is a compelling exhibition featuring the work of Ivana Bašić, FlucT, and Sable Elise Smith at Andrea Rosen 2. Looking at social, political, and psycho-spiritual dimensions these artists offer definitions of the body beyond its biological structure. The exhibition explores philosophical meditations on how to think about a body, rather than how to be a body that thinks. Our bodies are defined as much by our engineered physicality as our conscious, unconscious, and conditioned psyches. Not to say that a body is always married to its psychological master, as evidenced by dysmorphic disorders and the bizarre phantom limb, a condition where a body feels an appendage it no longer has, among others. While some of these dissonances can be diagnosed as “malfunctioning” hardware, the artists in this show explore how other dissonances are the result of lasting trauma caused by random violence and systemic oppression by asking, “How does the state exert its sovereignty over a body?” Through corporeal punishment on a criminal or through more subtle means, against the psychological well-being of its people? Decades after Foucault’s Madness and Civilization and Discipline and Punish traced our relationship with mental illness and our relationship with the state, we find the answer within ourselves: still subjugated by and indoctrinated in a culture that uses stimuli and simulation as weapons to render a body a shell of itself, like a zombie in a barely waking life — Foucault’s nightmare.

Ivana Bašić’s work is that nightmare. Imagine if some dark overlord put your body in a blender, turned it on, and then, like a starfish, your body reassembled into some tortured mass of bone and flesh just trying to get back to its original configuration, presumably in an elemental or gaseous state. Bašić, born in Belgrade, Serbia rips the body from itself by breaking its assumed limits. The sculptures appear tenuous and impart a sense of unfolding that rejects the supposed permanence of the body and instead highlights the forces of its own making. It should be noted that weight and pressure are listed as materials on the gallery checklist. The degree of exchange and power between a body and its total environment is drawn into question by the cold, rigid and institutional apparatuses that support Bašić’s forms. It is unclear what is a crutch and what is a restraint – an apt metaphor for the relationship between the state and the body. 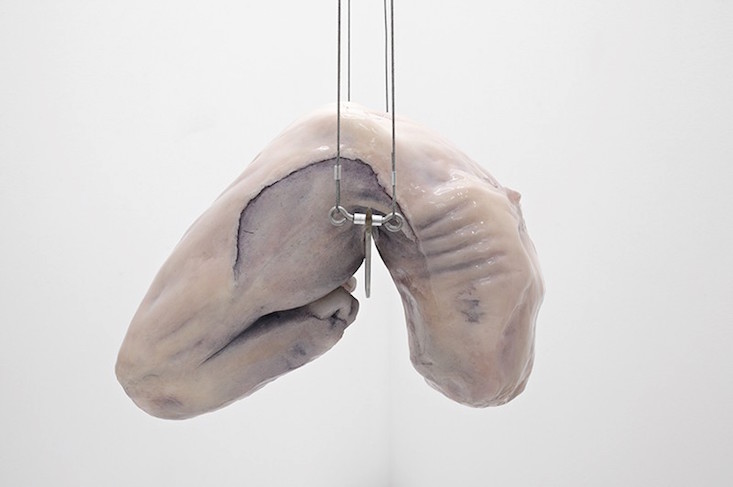 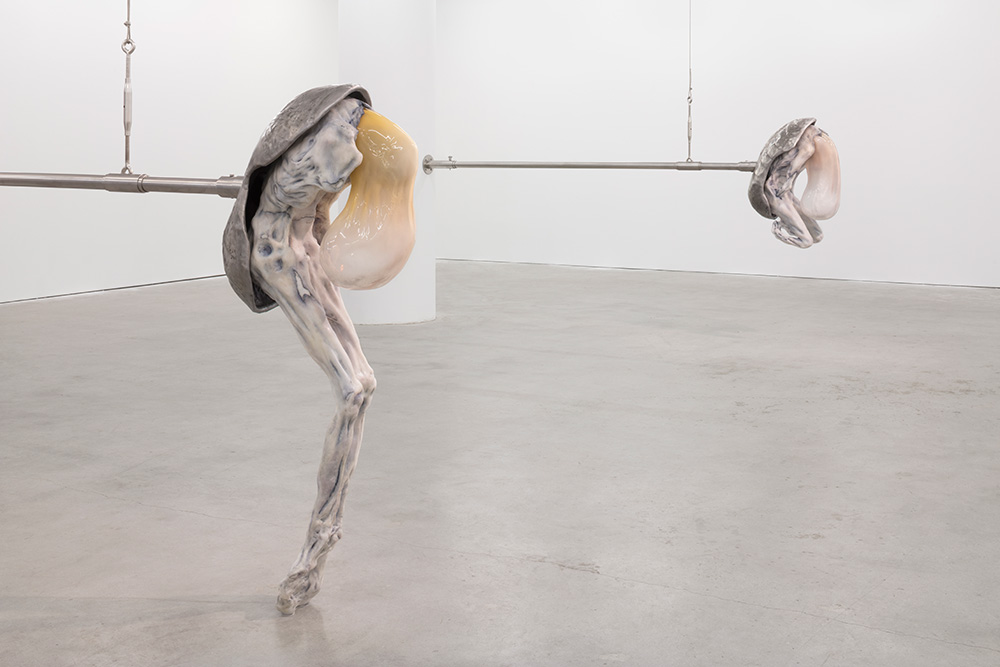 In 1,000 Plateaus, Deleuze states that an artwork is a monument if it has the ability to “confide to the ear of the future the persistent sensations that embody the event.” Bašić’s sculptures, particularly ‘Population of Phantoms Resembling Me #2’ and ‘Stay Inside or Perish’ are the monuments of our modernity. They reflect our current collective psychosis, the slow bleed from culture in the incessant crunching of capitalism, memes, and nihilism where everybody is assaulted by images that continually rupture the spirit from the body in a tortuous cycle as we try to return to a safe, warm interiority only to be violently flung out again. It is as if a Francis Bacon painting emerged from the ether to fuck you up. There is more to this comparison than their aesthetic familiarity. Bašić and Bacon share a psychological perspective, a glimpse into a discrete dissociation in which a wretched encounter between interiority and external forces impedes the potential for spiritual, physical, and emotive emergence. But where does the dissociated body go? Is it even a body? Bašić suggests it dissipates as an active force within its environment. This thinking is inspired by the artist’s attempts to trace her body’s transcendence (breath) within its environment through handblown glass sculptures titled ‘Breath Seeps Through Her Tightly Closed Mouth’ (#1 and #4). Breath is life, and in this way, Bašić has given her body a new form. As the title suggests, each glasswork is a portrait of the artist, outside her body in a gaseous exchange with its surroundings. These works are unassuming, but potent in their ability to materialize an imperceptible interaction between our bodies and our nebulous atomic home. Ultimately, Bašić’s work is less about death and more about reemergence from contingency and learning to see the body as an entity outside itself with the potential to be individuated yet still conducted by forces exerted through violence, phenomena, architecture, culture, and politics.

If Bašić’s work demonstrates the horrors of a body isolated from the self and dismembered by culture, then FlucT’s work offers a way to heal the body through movement, relational, and interrelational aesthetics.* FlucT is a collaborative endeavor, started in 2011, between New York-based performance artists Sigrid Lauren and Monica Mirabile. Their relationship is at the crux of a practice that combines community building as well as narrative musical compositions, spoken words, and props aimed at confronting societal standards of the other by connecting the body back to itself through movement and touch. FlucT’s performance, entitled Alienated Labor, is shown through a rear projection on a large, frosted glass panel. The frosted glass turns their bodies into specters that appear and dissolve in your periphery as you move about the space. Their movements are violent yet tantric but are neither sexual nor plutonic. It is this vagueness in the work that dissolves the codes of accepted interactions between two bodies in western society and opens up the body to a number of new ways of establishing connections with one another. FlucT presents us with an unfolding scene between the body and psyche in the deranged playfulness between Sigrid and Monica as they flail on one another, connected, twisted, and tangled into a single creature only to break down into two distinct yet connected bodies locked in a dance between animal and human. At one point Monica shows her belly to the camera and reveals a drawing of a fetal pig.

German theorist Curt Sachs described the dancer as one “who lives at once in time and space” because “the creator and thing created are still the same thing.” In this way, FlucT’s work is an attempt to manifest in the present alongside another body and to mitigate isolation through collective individuation. Their strangeness is seductive and evokes a certain longing for corporeal love; however, that daydream is broken by a call to action when the duos’ movements sync up to glitched out snippets from the Marxist manifesto: “workers of the world unite!” and “what do you have to lose but your chains” decays into “what do you have to change.” As much as performance can be about spectatorship, FlucT is not interested in voyeurism, but rather using the body as the epicenter of a revolution through a radical intimacy. 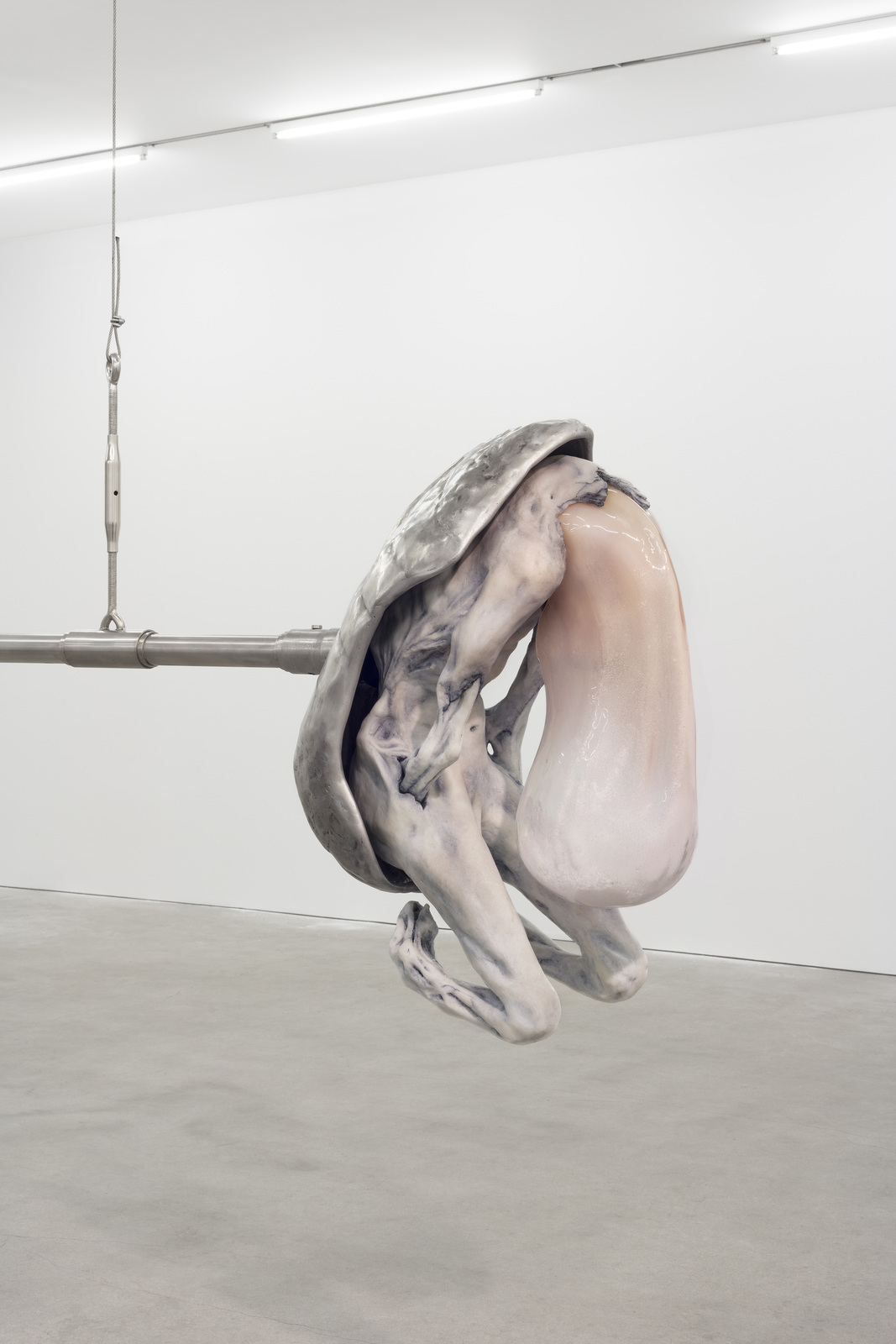 Now we must ask, How do we achieve a radical intimacy in a digitized age of communication where we touch less and look more? What are we to make of the resulting isolation coupled with institutional propaganda geared towards demonizing bodies that don’t subscribe to the standard white male code and therefore inherently exist in opposition to a racist, vindictive, and unforgiving state? The state does not only instigate through propaganda but actively subjugates and removes agency through unfair law enforcement in the name of public safety. It is well documented that black people are incarcerated at higher rates and endure harsher sentencing than white people. This is an American tradition that can be traced back to slavery. Sable Elise Smith’s work is centered on exposing these conditioned and systematic biases against black people by recounting her familial history as it relates to racism and mass incarceration in the United States. Two small letter boards, like the ones used for school menus or camp schedules, are locked behind glass with the key in reach. Smith does not serve lunch but, instead, serves the viewer inescapable truths like ‘My Father Was a Drug Dealer and He Loved Me’. Those ten words are outrageously potent and chisel away at the projected identity of what a drug dealer, a criminal “is”: hard, undeserving, and damaged. Instead, Sable reveals her father, the “drug dealer,” to be a human, a man who loved his daughter and whose daughter felt loved. We are forced to ask, Is the state the only thing that makes Sable’s father a criminal, and does the state make criminals? In The Three Ecologies, Guattari states that individuals are “captured” by their “environment, by ideas, tastes, models, ways of being”. Sable expands on Guattari’s thinking in her other untitled wall work which details the jarring and dislodging sensory experiences of visiting, presumably, her father in jail. Sable notes the fluorescent lights, common to many institutional buildings, with their constant buzzing that “can’t be drowned out.” She goes on to say that “if you think [the buzz] ceased it’s because the buzz has now become a part of you. You walk around with it. I walk around with it. Becoming.” Sable’s words reflect the recurring elements of stress related to trauma but also show how the state is able to fundamentally impact a body and its future through a psycho-physical inscription that becomes a part of the body and is thus integrated back into the state through stimulation, lived experiences, control, and memory. The power of language is used to bridge an understanding that does not demonize victims of the state’s perpetual injustice. This sensitivity and understanding is crucial to breaking down the rigidity and supremacy ingrained in us over centuries. In this way, Sable’s work might be the most “real” work in the show, despite it being formally poetic, because it has the ability to boil down experiences to an animalistic viscerality and, in turn, to act as a call for a future yet to come.

But what is yet to come? In order to answer this question, we must have a better understanding of our present. We must think deeper and examine the complex systems of connections and machines that dictate our present and future if we are to be hospitable to the human and non-human forces that sustain us. How else can we heal (or cut) the state from the inside? We must help others to understand the same, for a failure to do so will result in a future that will never come.

Without a body is open until February 4th at Andrea Rosen Gallery 2 in Chelsea.

*Interrelational aesthetics is a study of artworks that actively engage the body through sensory and spiritual stimulation and prompt healing, introspection, and reclamation of power.

Robert Feintuch on the Vicissitudes of the Body