Robert Feintuch on the Vicissitudes of the Body

Robert Feintuch draws upon historical, mythological and religious sources such as The Assumption, Bacchus, Icarus, and Tom and Jerry. His work has been described as simultaneously “tragicomic,” “tender,” and “subversively ironic.”

I interviewed the artist during the current exhibition Rona Pondick and Robert Feintuch: Heads, Hands, Feet; Sleeping, Holding, Dreaming, Dying. This is the first show which juxtaposes Feintuch’s paintings with Pondick’s sculptures in order to look at influences and correspondences between their work. The exhibition opened at the Utah Museum of Contemporary Art in 2017, and has traveled to the Bates Museum of Art where it is will be on view until March 23, 2018.

Deianira Tolema: Often when we think of figurative art we think about the female nude, but your work is rather unique in how it centers around the male form. Do you ever paint female figures? Is there a reason why you prefer painting the male body?

Robert Feintuch: I have made occasional paintings of my wife, the sculptor Rona Pondick, or paintings that include her. When I made the transition from making abstract paintings to working figuratively, I began using myself as a model.

I hope the work speaks to more than maleness. I was a real admirer of John Coplans‘ work. He was a friend, and while I’m not sure he thought about it this way, I loved how some of his work seemed to both embody and parody images of masculinity, and to present his body as an object in ways that are historically associated with the feminine.

I like parody. There are periods in my work when I’ve taken poses or positions I saw in history paintings, or in newspapers, and in retrospect those postures often seem to be about assertions of power. That’s where the first images in my paintings of men with their fists up came from. I thought it could be interesting to try some of those poses on myself- both sincerely and as a form of parody, and in skeptical recognition of some of my own desires. 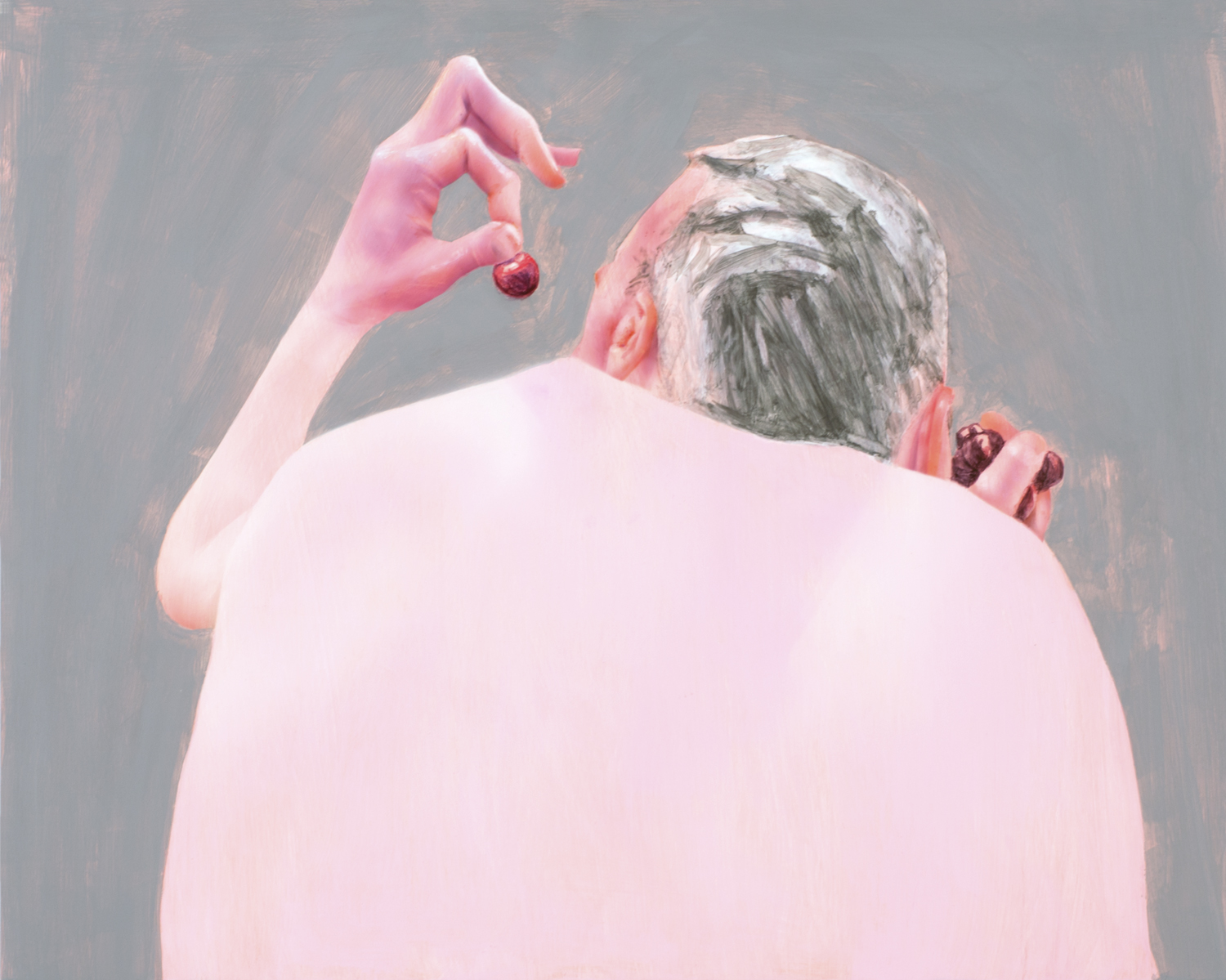 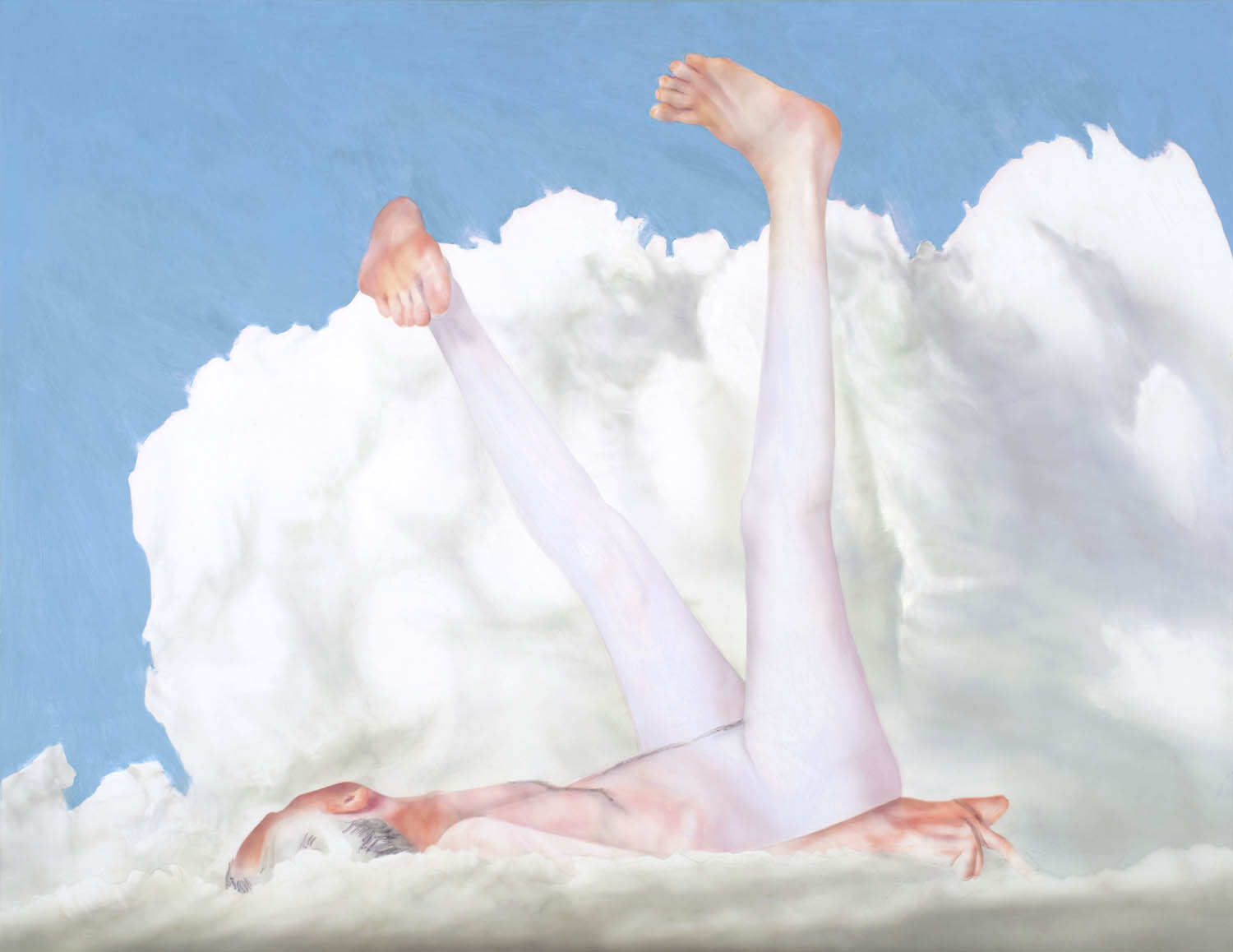 DT: Arm Up, Knock Out and Standing with Newspaper feature figures that seem to be in the process of disappearing into their surroundings. Is this representative of a larger theme throughout this body of work? Perhaps a memento mori or some other existential struggle with aging and mortality?

RF: Yes, there’s that. Things are disappearing. Also, some of my favorite historical paintings are unfinished, and I still love the magic of seeing something come up from nothing.

DT: Your paintings often seem to embody a tragicomic link between the humorous and vulnerable. Can you tell us more about this?

RF: The link seems real to me, and very much about looking at and finding a way to get through real life. I’m very much drawn to dark comedy because it seems accurate to me.

DT: Does it relate back to your Tom and Jerry influences at all? The way those characters torment each other is quite sad and cruel, yet we all laugh at their constant quarreling.

RF: Tom and Jerry were a cartoon cat and mouse – animals that clobbered each other in every episode. But their scheming, aggression against, and oddly, love for each other, seems entirely human. They openly acted out desires that are socially unacceptable, and rarely admitted to. I saw them as a comically accurate version of the unconscious unleashed.

And I always liked that after one or the other were assaulted and flattened, they sprang back to life, in a kind of resurrection.

DT: You reference mythical figures such as Hercules in your work. What relevance do you feel these figures have in our contemporary world? How do their legends translate into our modern lives?

RF: I look at both antiquities and contemporary art from a psychological point of view – as signs of desire. When I saw the Farnese Hercules in Naples, I found it funny. He is a hero, a symbolic protector, often depicted as if he is on steroids (which makes him proportionally pin-headed) The sculpture, though, is supported by a tree stump and a club. I have worked with the iconography for a long time, using myself as a model. A few years ago, I painted myself fat, propped up with crutches, and clutching a limp club.

DT: Does your training as an abstract painter still influence your work at all today, or do you feel you’ve moved away from that style entirely?

RF: Recently, an old painter friend of mine told me that I use color amounts like an abstract painter. I took that as a compliment.

I can think of form as a thing. I’m sure that comes from having worked abstractly. But I am mostly interested in the ways that form affects images and the meanings they suggest.

I do make little, kind of accidental, and casual abstract things on palette paper in the studio that I think of mostly as ways to look at color and composition. But I really don’t think of them as completed work.

DT: Who are some other artists you feel are making interesting work about the human body today?

RF: Visiting museums and galleries with Rona, I look at a lot of historic and contemporary sculpture, and it has been a great source. Rona’s work means an enormous amount to me. I’m an admirer of Jeanne Silverthorne’s work and feel very close to some of it.

Louise Bourgeois’ sculpture, and John Coplans’ photography has been important to me. Though most of my peers work abstractly, some work figuratively, and I am pretty much an admirer of any who are still on their feet.

DT: Are there any current/upcoming exhibitions that you’d like to mention to conclude the interview?

RF: Both Rona and I have work in an exhibition of the Sonnabend collection which opens this month at the C’a Pesaro in Venice, Italy.